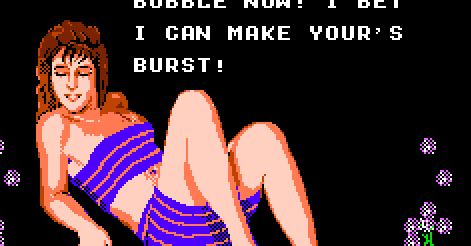 No, I didn’t decide to look at these late 80s/early 90s games purely because the click-through rate on the thumbnails is likely to be high. I wanted to look at them because the idea of a “sex” game on an early Nintendo console just fascinated me. Turns out, there’s a real rabbit hole to dive into on the subject. Asian bootleg game companies were making “adult” content for the Nintendo Entertainment System in the 80s and 90s despite the lack of support from Nintendo, and some companies such as Hacker International and Sachen were absolutely pumping these bad boys out.

BUBBLE BATH BABES RATING: This is an okay puzzle game. The creators, C&E, did make a family-friendly version on the Mega Drive for release in 1993 if you want to play it with better graphics and less godawful sex puns. 6/10

HOT SLOTS RATING: Oh god, this is beyond awful. Absolutely zero fun factor, with the only saving grace being the kind of catchy music that gets annoying after, oh, only about five minutes. 3/10

PEEK-A-BOO-POKER RATING: Not as bad as Hot Slots, but not enough satisfying nudity to warrant having to play 5 card poker against a CPU. It’s fine if you know how to play poker, but averagely-drawn girls and godawful puns on the reward screens are not enough of a reason to play this. Just use the cheat code on the title screen if you need to see 8-bit breast so badly (press Select, Start, A, Up, B, Down. You filthy, filthy person). 4/10