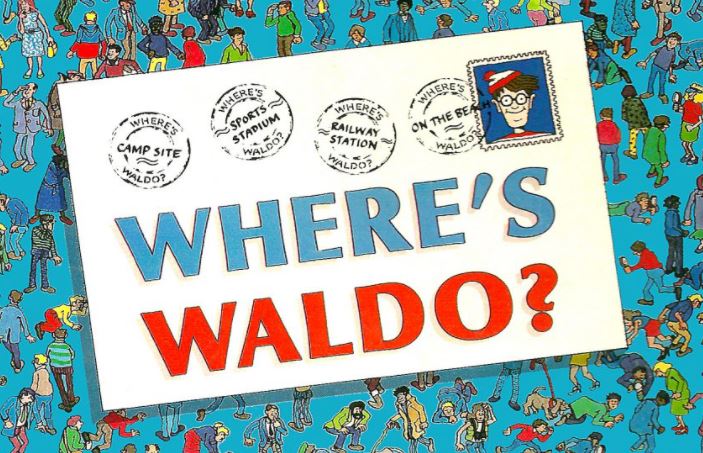 Oh god, Where’s Wally books are the absolute dog’s baubles. Absolute classic kid’s book action right there, no holds barred. I never had the books as a kid, but I did have a Walker Bear annual (which I still have – it’s been nibbled to fuck by a long-passed pet bunny though) which included one page from the first Where’s Wally book. I must have spent ages just looking at all the little things going on.

My brother and I actually got the knock-off series of books when we were kids – Hunt for Hector, Find Freddie, Search for Sam. I remember the Hunt for Hector one had a page where all the humans on it were being led around on leads by dogs, which creeped me out then and it creeps me out now because the internet has ruined me.

The NES Where’s Wally game (released only as “Where’s Waldo”) hit the shelves in America only in 1991. And to be fair, there is an attempt to recreate the style of the books by throwing as many little figures on the screen as was probably possible. From a technical standpoint, it’s actually quite impressive. From a gaming standpoint, it’s absolutely dire.

Here is the video on the topic.

Wally (or Waldo) got another chance to strut his stuff, although not thanks to Bethesda this time. The Great Waldo Search was released on SNES the following year, and it’s considerably better in many ways – and worse in others. For a start, although you can work out what’s going on in the screens, there isn’t really very much to see.

Also, The Great Waldo Search was released on the NES too. Because…some reason. Some dark, cold, twisted, reason.

Urgh, okay okay, the NES version of The Great Waldo Search is actually alright. It’s the kind of game that is fine on NES but a bit rubbish on the SNES – because you’d expect more from the SNES. On the NES it looks more impressive given the hardware limitations. Although since it’s exactly the same as the SNES version, it’s just meh.

Well, there you go. No thanks Wally, you go ahead and stay lost my guy.